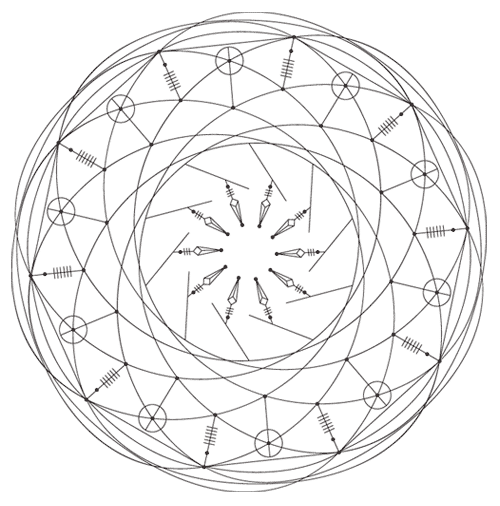 Many of the worlds great thinkers and scientists were first struck by profound experiences that led them to research and develop new ways of thinking. C.G Jung, largely considered one of the greatest minds of our time, tells the story of his academic career in a similar way. Jung was inspired by phenomena that didn’t fit into the narrow lens of consensus reality, causing him to develop the concept of synchronicity.

As a young man, Jung witnessed a solid oak table suddenly split and break apart. Within moments he saw a steel knife break into pieces. Both events happened apparently without a cause. His superstitious mother was there to witness the events, and she looked at him in such a way that made him think on the matter. He learned that other members of his family had been participating in seances, and they had wanted to invite him. This synchronous event stimulated him to join the seances, which led him down a path of interest in occult phenomena, that he would later develop in the academic arena coining the word Synchronicity to explain seemingly “acausal” events and “meaningful coincidences”.

Jung would eventually cross paths with Albert Einstein and physicist Professor W. Pauli. He explains that his relationship and conversations with these physicists helped him develop his thesis of psychic synchronicity. In one of Jung’s letters, responding to Pauli he writes, “Synchronicity could be understood as an ordering system by means of which similar things coincide, without there being any apparent cause.”

It seems that what modern physicists have learned about the nature of reality and sub-atomic particles may suggest that Jung’s concept of synchronicity is not the exception to the rule, but perhaps the way in which reality operates. In this chapter I describe some of the theories of leading quantum physicists to explain the notion that came to me while meditating on the porch in Waipio valley as explained in chapter 1 of this book: ‘I had the thought that if everything outside of me is a sort of communication from spirit, or type of reflective symbolism, then every physical sensation I experience in my body is also a communication from spirit. Every good feeling and likewise every pain or irritation translating like a message.’

University of London physicist David Bohm, like Jung, was struck by experiences that led him to rethink the nature of reality. For Bohm, as a physicist, that meant looking deeper into quantum theory. Bohm’s personal experience began while working with plasma at the Lawrence Berkley Radiation Laboratory. What Bohm discovered was that while electrons (sub-atomic particles) were in a plasma, they were observed to work together like an organism. Vast numbers of electrons were able to produce organized efforts, such as enclosing introduced impurities in a wall. The electrons in the plasma were behaving like a biological creature that expels foreign objects from the body, or an immune system that attacks opportunistic microorganisms. This impacted Bohm in such a way that he wrote he had the feeling this sea of electrons was “alive”.

This experience led Bohm to eventually question the underlying explanation behind quantum theory. In addition to Bohm’s experience with plasma, he also had conversations with Albert Einstein in which both men felt that quantum theory was good, but not complete.

The Holographic Universe, by Michael Talbot, describes some of Bohm’s philosophy and insights into the holographic nature of reality. Additionally, Talbot describes the discoveries made by one of the founders of quantum theory, Danish physicist Niels Bohr, and the fascinating relationship between Bohr, Bohm, and Einstein. The way Talbot describes this scholarly interaction is to first explain that Bohr pointed out a fundamentally new and radical way of looking at reality through the quantum perspective. Essentially that particles only come into existence in the presence of an observer. Prior to observation particles are described as a cloud of wavelike potential.

Bohr asserted that particle behavior was dependent on the observer, and that idea became the foundation for modern quantum theory. Bohr’s now widely accepted theory implies an interconnectedness between human consciousness and physical reality. Many physicists now believe that all matter is made of tiny particles they call quanta. However, quanta only manifest as bundles of particles while they are being observed. When they are not being observed, there is compelling evidence that they exist as waves. For example, when an electron isn’t being looked at, it exists as a wave. The wave becomes an electron once it is being observed.

Bohr felt that if subatomic particles only manifest in the presence of an observer, then it is meaningless to discuss or investigate the particles properties and characteristics before observation, implying that physicists should not philosophize into the deeper meanings that cause this interesting relationship between mind and matter. It was this idea that bothered both Einstein and Bohm, both of whom longed for a deeper explanation of quantum theory.

Bohr’s experiments increasingly revealed profound implications, discovering that two particles could communicate instantaneously even after they traveled great distances apart. For example, when an unstable atom would decay into two photons of light that traveled in opposite directions, as soon as the photons were finally observed and therefore coalesced from a wave into a particle, they were always found to have identical angles of polarization. This caused physicists to wonder how the two particles could instantaneously communicate an agreement to appear at identical angles of polarization after traveling great distances. Einstein used this seemingly impossible feat to attack quantum theory, but Bohr explained the phenomena with a theory of interconnectedness, theorizing that quantum particles are not independent things. Eventually most physicists agreed with Bohr, which gives us our current quantum theory that all things are connected at a sub-atomic level by the phenomena called Quantum Entanglement.

The idea of Quantum Entanglement is based on experiments in which physicists break apart an atom into two sub-atomic particles. They then separate these particles and perform experiments on them. Interestingly, when they changed the spin of one particle, it instantaneously changed the spin of its twin particle, even at great distances of separation, measured up to 10,000 times faster than the speed of light. Einstein didn’t like this revelation because it violated his theory of relativity, in which information could not be transmitted faster than the speed of light. However, quantum entanglement became irrefutable, and gave way to the idea that there may be dimensions of reality beyond what we perceive as physical, in which information can transmit faster than the speed of light.

An interesting aspect to note about these discoveries, is that it seems to be on par with what shamans, spiritualists, and ancient cultures have been saying for thousands of years. That everything is connected, we are all part of a greater one thing, and therefore treat others the way you wish to be treated.

One way to imagine the idea of quantum entanglement and higher dimensions of reality, is to use the analogy of a piano. Every octave on the piano has the same order: seven major note keys A-G (the white keys), and five minor note keys (the black keys). Containing those twelve keys are multiple octaves that span from low notes at the far-left side of the piano, up to the high notes on the far-right side. Each octave is the same configuration of the twelve key notes, but with a higher or lower sound depending on the octave. At a certain point if the sounds were any higher or lower they would be imperceptible to our human ears. Imagine dimensions of reality are like octaves. There are spectrums of light that we cannot see, and spectrums of sound that we cannot hear. Therefore, there may be dimensions of reality that we cannot perceive because they are vibrating at a much higher frequency than we are capable of perceiving. This is one way of explaining quantum entanglement, or the idea that some form of communication is taking place faster than the speed of light, with no detectable communication mechanism.

Excerpt From The Depth Of Synchronicity, Chapter Four